Ilkley, West Yorkshire, to the north west of Leeds, is a delightful Victorian Spa town on the edge of the Yorkshire Dales National Park. People really enjoy a weekend of tapping in our delightful town. Ilkley is easy to reach by road, rail or air and there are hotels, inns, B&Bs and Airbnbs. Plus lots of cafe’s, restaurants, bars and shops.

Where to Stay in Ilkley

Our venue is The Clarke Foley Centre, Cunliffe Road, Ilkley, LS29 9DZ situated right in the centre of town and an easy walk from rail and bus stations. The Clarke Foley has good disabled access. Please Contact Us if you have special requirements. You are welcome to bring your own food and drink to eat in the main hall or there is a wide choice of cafes and sandwich shops nearby.

Ilkley is now zoned for Permit Parking and Pay & Display so be prepared to pay for parking and do not park on residential streets without checking the signage.The small car park behind the Clarke Foley centre is for staff only and not for our use, please do not park there, you will be asked to move.

Where to Park: the main carpark opposite Clarke Foley has a six hour maximum stay, if you park there you would have to buy a second ticket at lunch time. For all day parking for £5 use the Pay & Display on Kings Road, Grove Road, Bridge Lane, Railway Road or New Brook St. If you go further along Kings Road and Grove Road beyond the marked and signed areas there is unrestricted parking.

Ilkley is now a permit parking town. The closest all day Pay & Display parking is on Bridge Lane or further down New Brook Street towards the bridge.

The Flying Duck is 5 minutes walk from Ilkley Railway Station.

The Flying Duck does lunches on Friday but will not be able to seat all of us. There are many cafes and sandwich bars nearby. 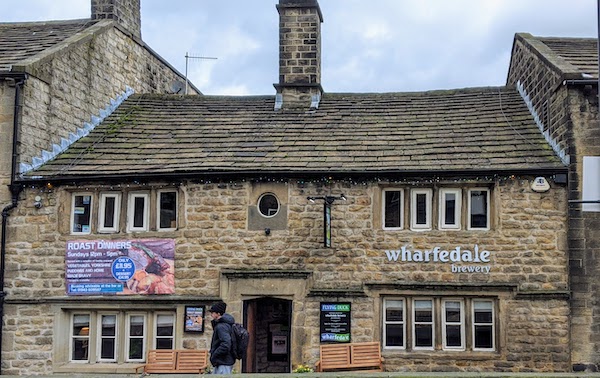 Ilkley is in West Yorkshire, to the north of Leeds and Bradford. About half way between London and Edinburgh.

Manchester Airport MAN has international flights and frequent trains from the airport rail station to Leeds where you change for the Ilkley train.

Leeds-Bradford Airport LBA has daily flights from European cities with www.Jet2.com   Ilkley is 11 miles from the airport.  Get a taxi or take the bus to Otley and change to the Ilkley bus.

London Airports.   From London Heathrow or Gatwick, travel into central London then take the train to Ilkley via Leeds from Kings Cross station. Or get the BA flight to LBA.  www.nationalrail.co.uk for advance (cheaper) train tickets.