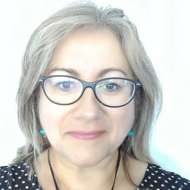 This user has not added any information to their profile yet.

TAPPING WITH THE ELDERLY
SATURDAY 3:15pm

When I started to work with elderly people, I discovered a world, a world of sadeness, powerlessness, a secret and taboo world.

I invite you to come to learn about all the tips and tricks we can undertake to help the elderly to feel better and free, even a with a person who speaks not or will not move.

Seniors appreciate EFT in unique ways. Come and share my experiences assisting seniors in my native country of France.

At the end of 2015, Catie was lucky to be chosen by the French National Health Services for a 7 months contract on the way of bringing an answer to the non-medicinal coverage of the elderly dependent persons at home. Then she had another contract in 2016 to bring EFT into different health care houses and in 2017 and 2018 she thaught a hundred nurses and health care assistants the EFT technique.

Catie is an EFT expert certified by Gary Craig and an AAMET-accredited EFT Master Trainer. She started in 2002 and opened her practice in 2005, wrote in 2009 the first book on EFT in France “EFT un outil pour la vie » (EFT à tool for life) and created an EFT game cards (2010) to help her customers and students in their daily practice.

She has taught EFT training classes for the last ten years almost everywhere in France, she trains therapists, teachers, and people from the medical field such as doctors, nurses, psychologists, psychiatrics, etc.….

Catie does general EFT but is also a certified expert in pain and PTSD, and has lately devoted her time to seniors.

She is recognized as an expert in her region, Nouvelle Aquitaine, and is regularly interviewed by radios and magasines about EFT. She gives lectures every year in the IFSI (Institutes of Training in Nursing Care), and has worked for 10 years with the Pain Clinic Center of the biggest regional hospital, and often doctors, psychologists and psychiatrists in the area refer their patients to her.

As a result of her work, she was commissioned in September 2016 for a mission with elderly seniors living at home, and she has created a special EFT training for 52 nurses to help them with their particularly ardous tasks.

In 2015 she was invited to Gary Craig’s home for a week to work on Optimal EFT. And then with a team of colleagues, she translated into French the Official EFT Gold Standard posted on Gary Craig’s web site.